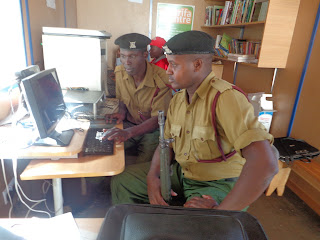 Over 800 civil servants in Kyuso have been able to access e-government services for the period between September 2012 to April 2013 through kyuso Maarifa centre courtesy of Arid Lands Information Network (ALIN).
The Government Human Resource Information System (GHRIS) is a web-based system used by the government of Kenya (www.ghris.go.ke) which was launched in 2011. GHRIS Portal’s aim is to address all the Government’s Human Resource needs. Users of the system access it remotely via the web, mobile phones and other technologies. Civil servants are required to update their information periodically and to access Human Resource updates including their pay slips.

This process involves civil servant registration in the system, updating of profiles, acquiring of P9 form as well as downloading of pay slips. Field Officer and ICT trainer have been instructing and training the civil servants on the use of computers and internet, how to process monthly pay slips as well as enabling them to get frequent online updates through their online profiles. With this knowledge, they have been able to create and update online government human resource profiles as well as to download their monthly pay slips.

However this process has not been an easy thing bearing in mind that few have computer knowledge. Mr. Stephen Owaret has been helping his colleague to process the payslip online after taking ICT training from the Maarifa centre. Owaret is an administration officer from the office of the president kyuso. He started helping the civil servants access their payslip when he realized that most civil servants were in a position he was in before he joined Kyuso Maarifa for ICT training.

Most of the beneficiaries are chief, assistant chiefs, administration police, Kenya police , ministries staffs etc. “I cannot fail to help my colleagues process the payslip because I also couldn’t before I was trained” said Owaret “Helping them has also been a learning platform for me because I learn new this anytime am called upon to help” added Owaret

Baobab is a quarterly magazine focusing on small scale sustainable agriculture in the East Africa region. It is primarily a forum for exchange of development ideas and experiences on key areas that ALIN focuses on; agricultural production techniques and climate change adaptation. Publications Baobab Magazine

ALIN is a Network of over 2000 CDWs and Numerous Community members in Arid and Semi arid area in east Africa. If you wish to join the network. Fill the free members ship form below.