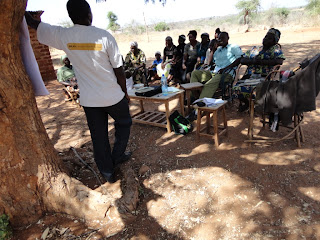 It is said that you cannot know the challenges or the problems facing a certain community without staying with them. Kyuso Maarifa centre was started in 2005 and since then the officer in chance has been interacting with the community to disseminate information.
The research carried by the John Njue, field officer Kyuso Maarifa centre found out that it is wise to gather the background information of the community, consider the cultural background of the area amongst other factors before moving in to implement a project or providing information.
During the Adaptation to Climate Change in Arid Lands (KACCAL) workshop held a Mwingi,Kenya, which was meant to validate the baseline survey carried by their consultant, there was a controversial issue whether the community of Ukambani (Kyuso and Mumoni) should be advised to keep camel as a climate adaptation strategy. The residents said that the culture of the place do not allow such animals to be kept while the professional especially those from ministry of livestock development and Drought management thought keeping camel in the area will bring destruction than construction.
They said due to the camel movement from one area to another they will cause soil erosion, end up causing livestock-human conflict since the land is owned and not community land tenure. They continued saying that region terrain does not support camel production since such production like flat land. More over the officer said that the camel multiplies every slowly and therefore it is not a sustainable animal to rear in the place.
Incase one was promoting camel production in such areas, then he/she will be wrong. According to the statistics collected by the Field Officer - Kyuso in 3 groups, it found that the most challenging things in arid lands especially in Kyuso is water scarcity/water salinity. “Was it not for water salinity in the area , the group should be doing kitchen gardening with the water we use in our kitchen” said Mrs. Josephine Mwonga, a secretary –Upenyo women group
Posted by Kyuso Maarifa Centre at 5:22 PM

Baobab is a quarterly magazine focusing on small scale sustainable agriculture in the East Africa region. It is primarily a forum for exchange of development ideas and experiences on key areas that ALIN focuses on; agricultural production techniques and climate change adaptation. Publications Baobab Magazine

ALIN is a Network of over 2000 CDWs and Numerous Community members in Arid and Semi arid area in east Africa. If you wish to join the network. Fill the free members ship form below.